So as expected although I decided to take a season break, watching the guys on Motorsport TV and Facebook the temptation was too much to stretch the cars legs. Kindly Bruce Woods the incumbent coordinator agreed to let me guest at in the Trophy races at Silverstone.

The car has not been run since I put it together after the failure at Oulton Park so it was overdue a try out. Arriving at the circuit late Friday night it was too late to do much but thankfully for once the Trophy wasn’t the first in scrutineering at 8am for once so I had some time on Saturday morning after signing in to prep the car.

Qualifying was deliberately steady, not been on track since last September and the car had done about a mile post the head rebuild so I wanted to make sure all was well. After a few laps I eased it up remembering that being a Guest I didn’t want to ruin any of the guys hot laps.

Qualifying plumb last for the first time in a while but pleased the car held together OK. Race 1 and I got off the line well and an immediate spin between Ray Ferguson and Clifford Bacon put me past the pair of them and then it was off after the pack. The car ran well and I could feel the pace was way better than Quali (Proving to being 4 secs a lap faster). Around 5 laps in a spin in the Loop between David Heasman and Joseph Dalgarno allowed me past David and for a few laps I held myself ahead but almost in the same spot as my spin he took me as Paul Bryson always used to in years gone by. (I hate that part of the track!) Coming in second from last the race was great fun and apart from a stiff gearbox selector which needed a new mount (Thanks Alex at 4G Racing) it was minimal prep for Sunday.

Sunday’s race again an OK start and the entire race I spent chasing Ray Ferguson and Clifford Bacon and although they ended up edging away (both in 170’s) I did well and at times through Copse was catching them until 2 laps before the end I lost the steering suddenly and what felt like a puncture occurred. A trip off into the Gravel out of the way I became one of the nine retirees. It turns out the dreaded bottom pulley has loosened again!! at least this time I caught it before any real damage occurred and apart from a black and white flag for track limits thoroughly enjoyed myself.

A great weekend and great to see everyone. 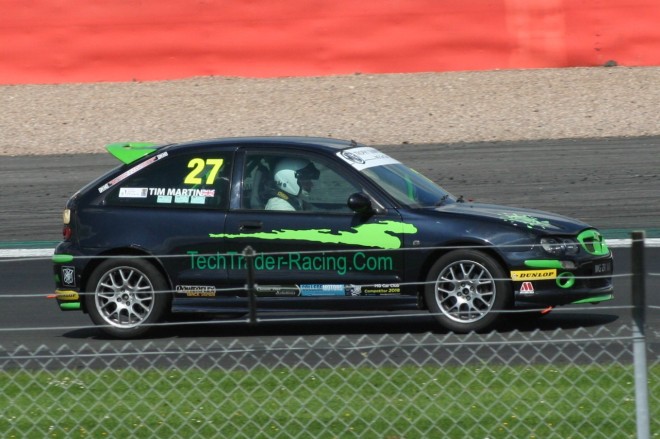 OK so firstly sorry for posting very little over the Winter break. The 2018 season I have decided was going to be one I am going to sit out on. This is for two reasons, last year I realised you cannot go in half hearted – doing an old house up and racing just didn’t mix. This led to rushed prep and mechanical failures. I also want to put effort into building a purpose built workshop in place at home to allow more time to spent on the race car and indeed the rest of the fleet!

I plan to do MG Live at Silverstone, the car is back together and ready to go and I have my licence. The Fire Extinguisher is serviced as required mid last season to it would be a shame not to get a run out at all.

Those that know me, know that I am not going to be able to do nothing at all so I decided I would tackle getting my MG Metro Turbo back on the road. This car I have owned since I was 18 and I bought it as a stolen recovered shell and built it up in my late teens to use for a couple of years. Its an original 1985 Turbo but I built it using a blend of Mk1 and Mk2 parts at the time with a slightly bespoke colour scheme. I liked it a lot, so I will not trying to get it back to factory, but back to my original spec. For interest and my own archive I am going to track the rebuild in  a page on here, if you are interested then enjoy. If you are just here for the racing then I’ll track my mates in the MG Trophy as the season unfolds and post that here too. 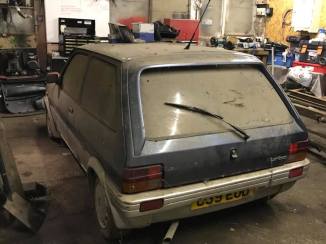 Oulton Park is a great technical circuit, its also 6 hours drive at least when towing on a Friday to get there from home. So this year with it being the first weekend in September I was able to take Eddie my youngest son with me (still on school holidays) and trek 7 hours to the circuit ready for race day Saturday. Dad was spending the week sightseeing so came along with his caravan in tow. I don’t begrudge the travel time given what the Scottish teams have to go through to race all year!

I didn’t make the cut for a garage this time so the gazebo made its first appearance for the year and good weather meant this was not an issue. The car all prepped we retired to Dads caravan to watch Dan Surridge and Paul Streather changing an engine in the paddock grateful to not have to be doing that!

Qualifying and the car felt good, took a lot of time to get heat in the rear tyres but 4 laps in they were gripping OK, then on the final lap of the session coming through Island bend the power steering was lost, then through Knickbrook a catastrophic loss of power and the bottom pulley had fallen off.

After being kindly recovered by the marshalls the situation was terminal, a borrowed pulley and bolt from Alex at 4G racing and a compression tester from Oli at preptech proved there was no compression and our weekend was disappointingly done! A long way to go to pay all that and do 15 minutes, and with a new job and no time I knew that Snettertion in 4 weeks was impossible to commit too at this time. So the end of the season for me with only three weekends out of six complete pretty woeful all round!

So fellow race driver but in the 170 Class (B) Ian Boulton started at the same time as me. He and I have been looking into maybe getting some tuition to further enhance those skills. I decided that if I ever wanted to take that up or give a passenger a ride in the car then I needed seat bars on the passenger side. While as I’ve mentioned previously I do al the car work myself, that is except welding I usually use Preptech for those metal work requirements.

Ian on a trip to Cadwell Park earlier had hit the barriers and needed a few Silver panels so it only seemed fair that a trade of some Silver door mirrors for an evenings welding was on the cards! I now have some passenger seat bars in place.

So in August’ Safety Fast we managed to sneak in on the Out and About pages tucked next to Jason Burgess’s Carrot Racing ZR 190:

With the car all prepared for Brands Hatch but having to pull out, their was little to do for Silverstone but load up and go. The main event for the Car Club it was great that the whole family came along, including the mother in law and my God Son and his family.

Qualifying went OK, the circuit is long but I know it now. It’s definitely taken the longest to learn though. Qualified P9 in class which isn’t great but I enjoyed the car working well. Race 1 on the Saturday was good, pretty formational. I managed to keep up with the pack for a while but then a complete lack of concentration at Vale caused be to go right off. This let the pack get away and as much as I pushed I couldn’t get back up with them with Rob Griffiths on my tail.  Then while on a charge someone had dumped fluid at Copse and I span right off stalling the car, right in front of my family. The car started and I pulled back on but my race was run – I trailed home in P9.

Again, not much to do in terms of race prep, the interior mirror had come off again so this time my Bro and Dad super glued it in place. Race 2 saw a good start and some good pace, again keeping up with the pack. This time it was Joe Cruttenden ‘s turn to spin at Vale and the yellow’s were out. Cars pulling off left right and centre, Jack Roberts, Ali Rushforth and Tony Jones all retiring in front of me. The safety car was brought out for Jack and this let Myself, Rob and Joe catch up with the pack. After the restart some great racing ensued with myself and Joe and he just got me on the last corner before the chequered flag so finish P7. 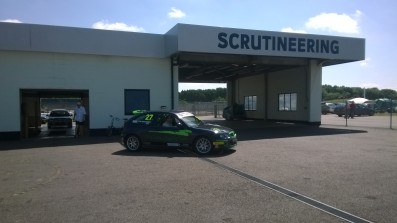 After getting all prepped for Brands unfortunately my son was very unwell so we had to withdraw at the last. A shame but necessary.

The only two jobs post Donington were to change the sticking n/s/f caliper and to adjust the n/s roll cage side bar section that wasn’t tight up against its mount location. Both straight forward to complete.

A new old stock caliper was sourced via eBay and fitted. Both front calipers bled and the sticking problem is solved.

Just loosening the side bar section bolts on the cage then re-seating the bars properly in their location cups before re-tightening the bolts sorts the cage issue.

Well I’ve been awful at keeping this site up to date this year so I better get it back up to date! I didn’t enjoy Donington, the pace for me was just not there. The car was OK but a n/s/f brake caliper sticking probably didn’t help but I just couldn’t find a rhythm.

Race 1 started with an OK start but Joe Cruttenden Managed to get past going up out of the Craner Curves into Old Hairpan but then Joe spun in front of me heading into Wheatcroft this caused me to have to slow to get safely past. Then I put some laps in slowly getting faster and faster then after around 10 laps I hit the sausage curbs hard at the Fogerty Esses and the interior mirror fell off and the car died causing me to pull over into the inside of Wheatcroft. As the Marshall’s walked towards the car I noticed the electrical cut off  switch had sprung down with the impact on the curb and I restarted the car, waited for it to be clear then pulled back on the circuit. By this time I was dead last and could just pump in the laps until the chequered flag.

The car other than refitting the mirror was OK for race 2 which was far less dramatic but again 2 seconds of my nearest rival and the pace was just not there. Cars seemed to be pulling off left, right and centre which allowed me to collect a few extra points but left a bit dis-heartened and deciding I must get some coaching this year.

Time to get the car back together, front bumper on, a few bits of paint re-touched, a couple of sound deadening bits removed that I hadn’t done. Seat and side bar back in and the car and back on its four ‘move around’ wheels.

Its now ready for its pre-Donington clean and first race weekend of 2017. 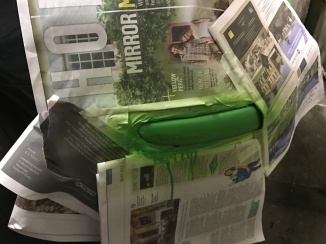 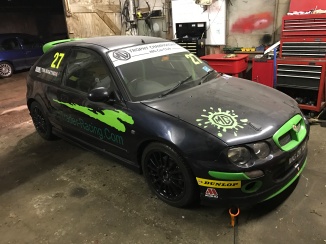