The first race weekend where my Father and I thought it would be better sleeping in the trailer than finding a hotel nearby over the Friday night and it wasn’t too bad, well for me anyway as my air bed stayed inflated unlike Dad’s!

Qualifying didn’t go well, despite countless hours of YouTube footage trying to learn the circuit as soon as I got out it was a learning curve and 1 lap in the Safety Car was out. Dan Malloy was OK but the car was a mess and the Safety car stayed out for 5 laps or so. Away we went again and the Yellows were out again and just as I thought I was getting to understand the circuit the chequered flag fell and it was back in to parc ferme with a mere 4 laps of any use during the 15 minutes I had not hooked a good lap up.

Race 1 and I bogged at the start and really was never in the race with the other class D drivers, Martin, John and Paul all got away well and I struggled to keep up let alone start racing. There were spills galore with people going off and waved yellows all through the session, the safety car came out again and it was just not going to be a consistent race. On the last lap my rear tyres went off and that blew the confidence away so I trailed in fourth. The timing sheets show we were all within 2 seconds on our best laps and all lapped at 62Mph so that’s close.

Race 2 and I nearly jump the start and this wrong foots me when the lights go out, but straight into the carnage as Paul Luti goes into the wall at Folly taking a few others out as well and the race is red flagged. After the safety car and restart I start really well cutting through Webber, Bryson and Gil to move ahead only to get completely blinded by the cement dust kicked up by Ray Ferguson’s car in front. I panic and slow right down allowing the others to pass on the outside, what a waste of a goo start. The race is shortened by two minutes but as Colin Robertson’s car takes off the end is in sight and the third session of the day finishes with me in fourth once again – very frustrating.

As we assemble after the race its a half full Parc Ferme showing the casualties of the day. 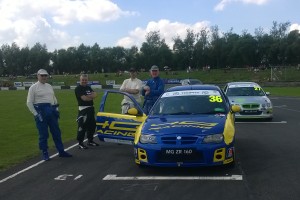 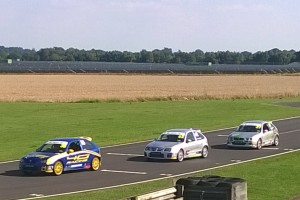 After the drama of Race 1 Silverstone and the fuel leak which we repaired before race 2 I decided to replace the return fuel pipe that looked in terrible condition – finding one was a challenge as I wanted to retain the OEM push fit connection. One sourced brand new for £11 seemed fair and 10 minutes later it was replaced.

Another repair item was to swap the lower engine mount that sites between the sump and the subframe. The rear bush has worn causing some engine movement, so one removed from the donor car I have around at the moment and again a quick swap. 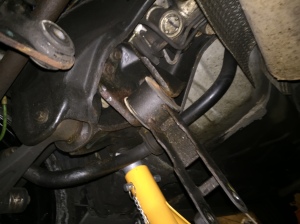 The last ‘fix’ before Combe is to put back the scuttle rubber seal that is a requirement for safety reasons apparently.

So light duties this time, lets hope it comes back needing the same fettling before Oulton.