This weeks work has (fingers crossed) been a productive one. Private testing on Sunday proved that on acceleration there is a definite cough between 2500 and 3500 RPM sometimes once sometimes a few acting more like a hesitation. I try a few things like unplugging each Lambda, new leads etc but no avail so its back to the workshop for investigation in the week.

Wednesday night and the screen is replaced, its had a crack that grew throughout the 2014 season but Mallory finished it right off so a new one is fitted. Along with this I fit a new Tilton brake bias lever to replace the cheap one that let me down. Just need to bleed them this weekend.

With an hour or so in my pocket I decide to investigate the cough, first I change the Temp sensor for a brand new one, then I remove the Inlet Manifold Pressure Sensor which is covered in oil from when I blew my old engine and give that a clean up. Next is the Throttle Position Sensor, I have ordered a whole new throttle body and sensor but I have a spare TPS so I replace that and finally disconnect the loom block where it joins the engine loom to the main loom. A blow out with the air line, soak in WD40 and then reconnect is in order.

Remembering to reset the TPS by pressing the throttle peddle 5 times with the ignition on then turn off and fire up. The car rough runs then settles down – time for a test drive.

A complete three runs up and down the road and its nicely accelerating through to 5k with no hiccups. Hopefully that’s it, another final test this weekend will prove.

The investigation started and it doesn’t take long to find the first suspect. While jacking the car up to swap the tyres to my moving around set I decided to warm the car up. The car ticking over I jack the car up – as it gets to full height on the jack it stalls and wont start. Drop it down it starts, then jack up and rev it and it stalls again. I then jack the Express up and no problems so the first tackle is why is it stalling up hill. 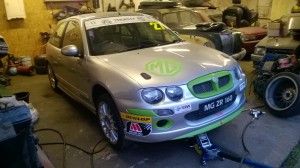 I take the tank out and there is fuel in the tank, not loads and I did put in a pump last year but I broke the sender when fitting it, so I find a bloke breaking a 53 plate 160 and get the tank and sender all in shipped while I take the kids to France for the week.

Fitted the new tank and 15 litres of motion lotion and despite a blown fuse the car starts and runs fine. I jack it up again and it does not cough or stall. Dan from CMC is getting me a race catalytic converter but I can’t fit it before Brands so I am going to do some local testing this weekend to make sure the tank and pump swap has solved the problem.

A wet and windy weekend was ahead and for me it really set the scene on a disastrous weekend opener for the year. We decided to take the caravan up on Saturday to make sure we would bet here on time and there was adequate shelter from the elements.

The first drama started when my Father and I tried to get the car loaded on the trailer, the brakes at the rear were seized on and after some investigation and effort the culprit was identified as the brake bias valve. Teach me to buy cheap, the thing was just jamming shut all the time, after a good ring round to local vendors, Olly at Preptech, Chris Bray and Brown and Gammons we decided we could bridge the pipe and run on  a 50/50 configuration.

Sunday morning (clocks changed making it feel really early) signed on and scrutineered all OK. Qualifying came along, the plan was a few laps getting familiar with the brakes then a few flying laps. After 4 laps the braking was actually easy to master but the car was losing power on the straights when changing from 3rd to 4th at high revs. This then go worse as the rest of Quali continued. Managed to last the 15 minutes and get back to the trailer. Nothing obvious we swapped plugs with the Express my brother had brought up and checked all connections. Driving round the paddock all seems fine but as the problem only appeared under load its a gamble. To top it off I am called to the Clarks office to be told the lap times were too slow and to watch it during the race after I explain the problems.

The race starts and I start really well, the engine seems to be pulling well, then I hit Stebbe Straight and the power drops just as Ray Ferguson’s engine spectacularly lets go in front of me. This time its really hard to get the car pick up as I hit the Start/ Finish straight I pull off and sit at the side of the Armco watching the race play out. After the race is complete I limp back to the trailer, withdraw from race 2 and go home. Lets just hope I can find the problem before Brands!

The photo shows where the car spent most of its time, behind the trailer. 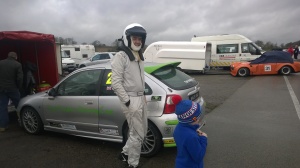 The final weekend before Mallory Park was a busy one, the main aim of getting the roll cage tightened up and new padding fitted. The brake bias valve just will not stop weeping around the connections so I will re-make the ends next Wednesday evening in the workshop. The last job was to make and install the door cards from the sheet of GRP I picked up from Preptech when collecting the car after its new cage was fitted.

After fabricating a cardboard template, armed with the a Jigsaw saw and leaving the house smelling of plastic burning I cut them out with my eldest son Williams help. They fit OK to the doors with some self tappers and despite some raggedy edges look OK.