So having thrown in a new (to me) engine for Snetterton as it came off the pallet it turned up on I thought it would be a good idea to do the head gasket etc as I don’t know when it was done. The head came off fairly easily and in there a reasonably clean block, head and MLS gasket so it was obviously done fairly recently but there are slight heat rings round the valves in the head so it was definitely never skimmed so off it goes for that. In my other engine I got marginally better performance using the original style head gasket opposed to the Ford developed later MLS we all would normally use, and this has also been backed up by some of my conversations with other driver/mechanics so one is on order. 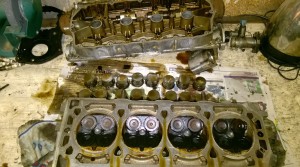 I have gained a larger bore Janspeed exhaust box and a straight through centre pipe that are hanging on the car but the centre pipe need some heat and bending to get it to stop pushing the back box into the body – a revisit on the ramp once the engine is back together.

With the car back from Preptech just before Christmas, it was time to start some of the jobs needed to be done before the saeson starts. The cage has been losely fitted so  removed the drivers door bars and seat to get better access to the car interior and as it was a cold day, it seemed a good time to start removing the rest of the sound deadening in the car with a cold chisel.

Just the passenger side to go and the drivers footwell then its all out. Exhaust system swap starts this wednesday.