Sorry for the delayed write up, busy at work and home catching up on DIY!

Another enjoyable weekend at Donington the track is still my favourite although the rules off track are a pain in the backside all be it to keep a local resident from complaining about the noise to the council.

An appalling nights sleep thanks to East Midlands Airport (obviously no noise complaints there then!) and the rain mean’t that most of us were wearily wandering into signing on before the challenge of moving a ton of car around the sloping paddock to scrutineering without starting the engine. Our approach was towing it there, but it was good to see everyone helping each other out to get the vehicles through to the scrutineers and that tells you all you need to know about the characters involved in the MG Trophy.

I have decided that scrutineers are like MOT testers. If they don’t spot something they have to go for a public flogging so with a tie wrap round the camera and brake master cylinder and a bit of tape round the pipe where it passes through the bulk head applied the car is ready to go. (Now a proper rubber grommit but only had tape on Sunday!)

Quali was in the wet, and there were a few that took off the track but I found the Toyo’s performed well in the damp even when I couldn’t see 20 yards in front  a few skids but nothing major and I remember thinking actually how much grip there was at Roberts even in the monsoon. Paul Bryson just pipped me by 9/10ths of a second so with new driver Martin Webber finding his first Quali in traditional British summer weather I was third in class for race 1 and 2 behind John Gil and Paul Bryson.

Race 1 and at turn 1 (Redgate) there is a two car spin and Paul and I luck out to Martin and John who get through ahead, only for me to follow Martin to Schwantz Curve where he slides off the track in front of me releasing myself closely followed by Paul to carry on tussling as ever! The car is OK but as I get through lap 6 the rear tyres go off and the bends become a challenge. The track was way drier than I was expecting and the tyres have got too hard leaving me struggling in Hollywood, Macleans, Coppice and exiting Roberts and then traffic passing me wrong foots my position and Paul is through. I hold on for 3rd, on the weigh scales the car is 10kg heavier that finishing at Brands and I took more bracketry out! Too much fuel and too much pressure in tyres have compromised my race.

My recording of race 1 is on YouTube apologies for it being slightly dark. http://www.youtube.com/watch?v=ILAa-3ARaG8&sns=em

Race 2 and Dad and I decide that we will not refuel as there is more than enough in there and the tyres are adjusted for a dry track. Pulling out the assembly area and Paul’s car seems to be kangarooing and I don’t see him arrive on the grid. I get a better get away but so does John Gil and he’s hard to keep up with but after just two laps Robin and Ali had some sort of incident and to say Robin’s car is destroyed is an under statement. The race is red flagged and we line up again, and Paul limps into the pits after originally starting from the pit lane. This time I get a better start and am able to stick with John for the first four laps before he edges away and I notice his fastest lap is only 6/10ths of a second faster which I am pleased with. A short race due to the red flag and late running schedule means I follow John in for second and Martin comes in third.

Loaded up (see photo) and the long drive home we get in at 11pm after a long old day! Key points for me were the fastest lap for me last year was 1:42 in the dry and this year 1:34 8 seconds is almost stopping and having a cup of teas as Martin Brundle would say. 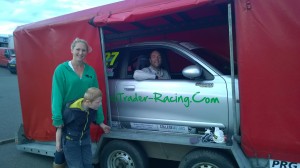