Well – sorry for the long break in updates, been a busy summer as I moved house, went to Knockhill and had the annual family holiday. Its all been a bit manic.

Mallory Park was an enjoyable day, I like the track but the car let me down again. Qualifying went well and I was confident of a reasonable time and a 58.9 seconds was significantly faster than my last visit. However, it was last in class and Dad spotted the car was very rich and lumpy on idle. Race 1 and I had a great dice with Paul Croker taking him up the inside on Shaws then managing to keep him behind but then the slipping clutch gremlins appeared and wrecked the race. The middle section of the lap the clutch was slipping along the Kirkby and Stebbe straight’s then it eased off for the last three laps but that was the race run. Then the red mist was going to then descend and I over cooked it a few times through Coopers and then had a massive off at Shaws – Alexander Montgomery thought I was off out the circuit for Pizza! The Marshall’s found it hilarious to point to the track and mouth that its over there. 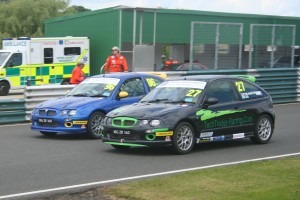 Investigation didn’t show much and with little time , we plugged in the code reader, VVC Solenoid Fault and O2 sensor issues logged. Not a lot I could do but just go for race 2,  again the slipping clutch returned and I just had to keep out the way and limp to the finish. Must get this issue resolved before I traveled to Knockhill. Disappointing performance but the weekend was enjoyable and great to see Rachel and Lisa from ASSERT turn up with their families in tow.

Did get  to try my new Gazebo out though 🙂 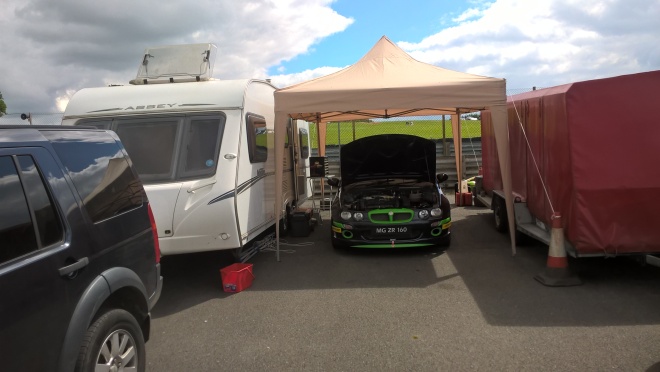