After Combe despite being disappointed with the pace, the car performed well. The Yokohama tyres on the front gave me confidence on bends so a new pair was necessary for the rear to go to Oulton Park and with my annual family holiday in between Combe and Oulton that is a much better place to be than last year where I cooked the engine at Donington and had to work very hard post holiday to get the car ready for Oulton.

While removing the wheels to do a pre-race check a fortnight before the race weekend I noticed that the o/s/f outer CV boot was split with the worst gunge known to man all over the hub and brake pipes. The CV boot had perished and split, a check on the near side showed signs of the same cracks appearing so two new boots required. 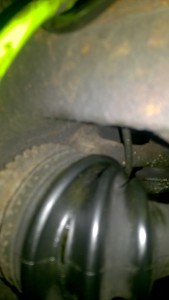 The job itself is not the hardest, for some reason the Motor factors locally now don’t stock Rover 200/25/MG ZR gaters’ just ‘universal’ ones which I think are called universal because their universally known to be rubbish!

Rimmer Bros to the rescue and two Pattern but proper ZR ones arrive and the job is fairly straight forward once the bottom ball joint is out of each arm and the hub nut is undone of course. In my book this is one of the messiest jobs you can do – I hate CV Grease!! The job is done and with two more Prada Spec tyres purchased and fitted we are ready for Oulton Park. 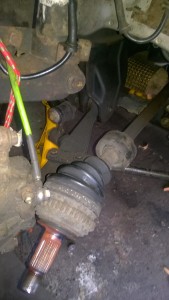