Been a busy couple of weeks but the brake lines are all in, they now have their first fill of brake fluid – with one leak spotted and hopefully dealt with I have left it standing to see if any more appear.

I have fitted a new battery as my blue ZR needed a new one so its got the race car 065 one now, ordered with a case its nicely fitted into to the battery tray.

I have done tackled the roll bar link bushes and boy what a job! Getting them out was easy one side the other the bolt was seized into the bush pipe and took some club hammering and precision grinding to get it removed. Once removed I had to get the OEM bushes removed, they are pressed in at the factory so I melted the rubber in the garden then using a hack saw cut a slither out the outer case and pushed them out with a socket. 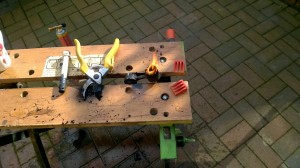 Once the bush is removed, greased up the ploy bush and pressed them in with my vice. All refitted as necessary.